With stamina.The latest 12.5-inch EliteBook model comes with a Kaby Lake processor, ensuring a significantly better battery life. We also liked the other features: IPS display, NVMe SSD, 16 GB of RAM, and an LTE modem. However, the device has also some weaknesses.

The models of the EliteBook 8X0 series are premium business notebooks. With the EliteBook 820 G4, we have the latest 12.5-inch model of the series at hand. It looks the same as its predecessor, the EliteBook 820 G3. Changes can be found inside: Skylake has been replaced by Kaby Lake. The price is well over 1000 Euros (~$1053). Hence, buyers can expect high-end materials, excellent build quality, and very good components. The latter is often missing: For example, the displays used are often not appropriate in view of the price. Our review will reveal whether this is also true of our test model. The EliteBook competes with devices such as the Dell Latitude 12 E7270, the Lenovo ThinkPad X260, and the Toshiba Portégé Z30-C.

HP has adopted the case of the EliteBook 820 G3 without any changes. The lid and the top side of the base unit are silver-colored while the underside and the display frame are black. The subnotebook lacks a maintenance hatch. In order to get to the hardware components, you will need to remove the underside. We will discuss this later. The battery is fixed.

The case of the EliteBook is made of stable magnesium alloy. The base unit proved to be quite pressure resistant. A lot of force is required in order to dent it. In addition, it does not twist. The lid can be twisted to a small extent, but the display does not show any image distortions. Furthermore, pressure against the lid does also not cause any image distortions. The build quality is beyond reproach: The gaps are even and you cannot find protruding material and/or sharp edges anywhere. The hinges hold the display securely. They teeter only slightly if at all. It is possible to open the lid with one hand. The maximum opening angle is about 140 degrees. 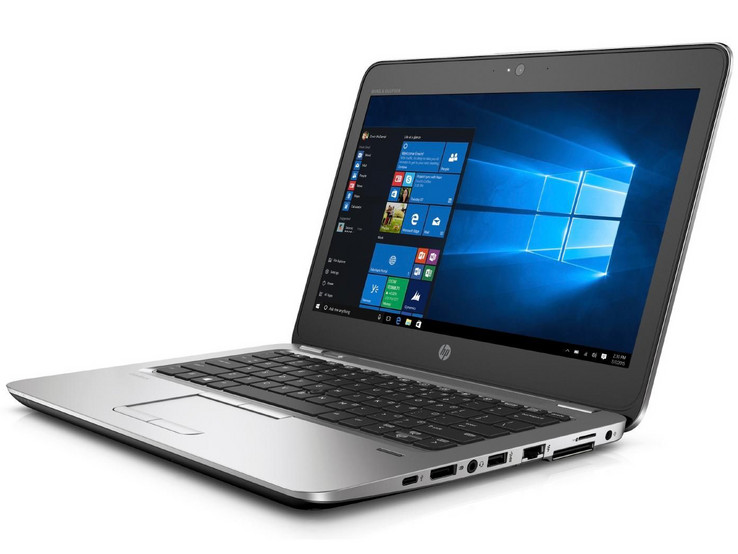 All things considered, the EliteBook is on par with its competitors in terms of size and weight.

The interfaces have also remained unchanged compared with the EliteBook 820 G3. Apart from a DisplayPort, it still features a VGA out. The three USB ports (2x Type-A, 1x Type-C) use the USB 3.1 Gen-1 standard. In addition, the computer delivers a docking port, which allows connecting proprietary HP docking stations. The interface layout is alright. The space beside the palm rest usually remains free of cables.

The built-in card reader is one of the faster representatives of its kind. It achieves a maximum transfer rate of 86.6 MB/s when copying large data blocks. Moving 250 jpg files (about 5 MP each) is done at 77.8 MB/s. Therefore, the card reader is on par with the models in most competitors. Only the Dell Latitude 12 E7270 achieves significantly higher transfer rates. We test memory card readers with a reference card (Toshiba Exceria Pro SDXC 64 GB UHS-II).

HP has equipped the EliteBook with a Wi-Fi module from Intel (Dual Band Wireless-AC 8265). Not only does it support the 802.11 a/b/g/n Wi-Fi standards, it also supports the fast ac standard (2.4 and 5 GHz). The transfer rates, which we recorded under ideal conditions (no other Wi-Fi devices close by, short distance between notebook and server PC), are very good. The Gigabit Ethernet chip (I219-V) also stems from Intel. It works flawlessly.

There is no shortage in terms of networking options. The computer also has an LTE modem on board. The SIM card slot sits on the right side of the case and allows comfortable insertion or replacement of SIM cards. 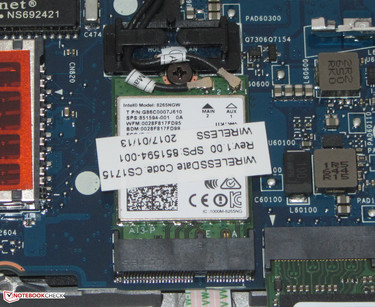 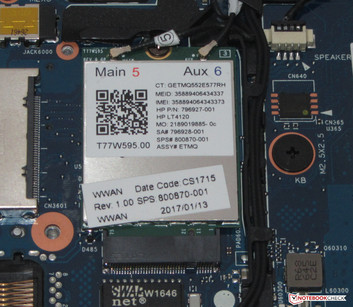 Since it is a business notebook, the device delivers many security features as a matter of course. For example, it comes with a Trusted Platform Module (2.0). There is a smartcard reader as well as a fingerprint reader for biometric access control. In addition, HP’s security software (HP Client Security) is pre-installed.

The web cam produces images with a maximum resolution of 1280×720 pixels. It is obvious that the images lack sharpness. Positive: The camera even produces quite bright images in low-light scenarios. 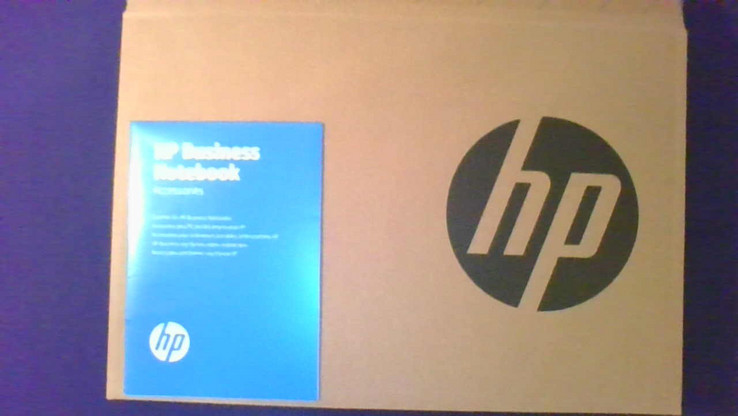 Apart from usual documents (quick start guide, warranty information), the computer does not include any accessories. However, HP has optional accessories in its line-up. The docking station might be the most interesting. The HP 2013 UltraSlim docking station can be connected to the EliteBook’s docking port. It costs about 120 Euros (~$126). Due to the fact that the docking port is also compatible with the predecessor models, you can continue using an existing docking station. As an alternative, HP also offers several USB docking stations.

In order to get to the innards of the EliteBook, you will have to remove the underside – a feasible undertaking. In order to do so, you will have to remove all the screws on the underside of the computer. Before you can do so, the rubber stoppers covering the screws have to be removed. These are only plugged and not glued. Another screw is in the memory card reader slot. You can reach it after taking the dummy out. Afterwards, the underside can be taken off and you can get access to the two RAM slots, the SSD, the battery, the LTE modem, the Wi-Fi module, and the fan. 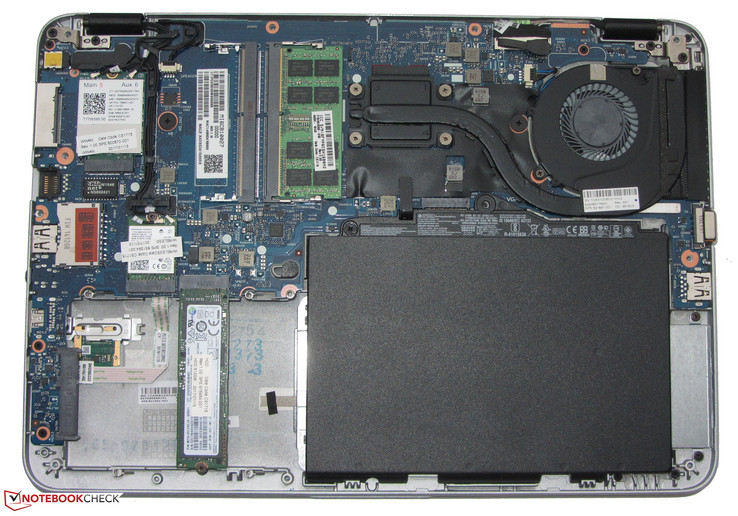 We are already familiar with the splash-proof Chiclet keyboard from the EliteBook 820 G3. It features a backlight, which can be controlled via a function key. Two brightness levels are available. The smooth keys feature a short travel and a crisp pressure point. During typing, the central part of the keyboard, right beside the TrackPoint yields visibly. Hence, the pressure point is slightly more spongy there. However, this can be viewed as nit-picking on a high level. Overall, HP delivers a well-made keyboard, which is also suitable for prolific writers.

The multi-touch capable touchpad of the computer occupies about 8.2 x 4.6 cm (~3.2 x 1.8 in). Hence, the space for gesture control is quite limited. Fingers glide easily on the smooth surface. The pad is even responsive in the corners. It can be enabled and disabled by double clicking the upper left corner. An LED indicates the state. There are two separate mouse buttons in front of the pad. They feature a medium travel and a crisp pressure point. Two additional mouse buttons sit above the touchpad. These are primarily meant for use with the TrackPoint. The TrackPoint appears to be good and allows quite a precise cursor control. 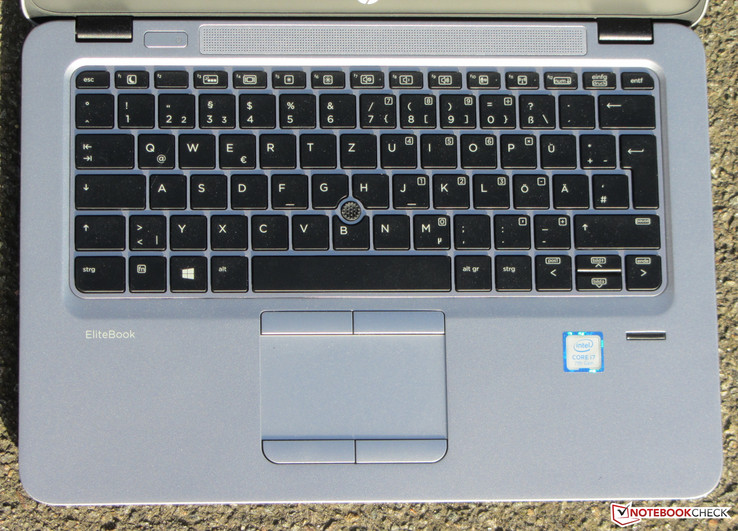 The matte 12.5-inch screen features a native resolution of 1920×1080 pixels. Brightness (304 cd/m2) and contrast (1124:1) are pleasing. We can seldom say this about displays in HP business notebooks. Positive: The display never shows PWM flickering.

Apart from the Full HD display in our test model, the maintenance guide of the computer also lists two other display models: a Full HD touchscreen and an HD display (1366×768 pixels). Most probably, the latter is identical to the one used in our EliteBook 820 G3 test model – dark, low-contrast display with narrow viewing angles.

There are no reviews yet.

Add to Cart
× Get some tips!